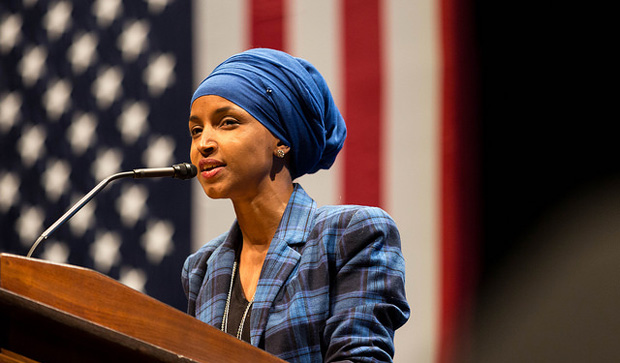 The results of the recent U.S. Presidential Election has left me, many of my fellow Americans, and many refugees across the U.S. living in fear of what a Trump-presidency could mean for their lives. As Gal Adam Spinrad, economic empowerment program coordinator for Refugee Women’s Network Inc. in Decatur, Georgia puts it:

“[Many refugees] are concerned their missing family members won’t be allowed to join them in America. They fear they will lose their green cards or be deported. Like their American counterparts, they worry about how they will get health insurance, whether they will be able to go to college, if their food stamps will be lowered…”

Transitioning from President Obama, who allowed 85,000 refugees into the U.S. in 2016 and increased that number to 110,000 for 2017. To President Trump, who called for a ban on Muslims entering the U.S. and will likely change the country’s refugee policy when he takes office, is going to be very challenging to say the least. But, let’s not get ahead of ourselves or let that overshadow the fact that on the same night of Hillary Clinton’s defeat, there was a huge win for the refugee community that evening.
On November 8th 2016, Ilhan Omar became the first Somali-American lawmaker in the U.S. As a former refugee, Muslim woman, and mother of three, Omar made history being elected to House District 60B in southeast Minneapolis, Minnesota. Omar’s win is just one indication of the positive impact that refugee resettlement has on the individuals resettled and the communities that receive them.
No matter the results of the recent presidential election, there are still Americans committed to receiving and assisting new refugees and vibrant supportive communities that want to see these individuals succeed in their new country. Communities like Minneapolis and San Diego, the U.S. city that has resettled the largest number of Syrian refugees to date, are models not only for other U.S. cities, but the world, on what an inclusive community that empowers its people and values diversity looks like, amidst a world that is seemingly more and more hesitant to open its doors.
As of June 2016, the UNHCR reported that there are more than 65.3 million people who have been forcibly displaced from their homes worldwide. Many of these people have fled their country and are living in places such as Turkey, Pakistan, and Ethiopia because it is unsafe for them to return home. Some choose to wait in camps and cities in hopes of being resettled in countries such as the United States, Australia, and Canada. While others try migrating to more developed countries in Europe and Asia. Each choice has its own set of challenges, but no matter the path there is the shared struggle of having to leave one’s home, move to a new country, and begin the integration process – sometimes in a community that is not particularly keen on welcoming refugees in the first place.
What can make this process easier is when a local community is open, willing, and prepared to welcome these newcomers, and San Diego is certainly one of these places. Located 30km north of Mexico and on the Pacific coast, San Diego is the 8th largest city in the U.S., the second largest in the state of California, and a third of its population is of Hispanic origin.
After Texas, California resettles the second largest number of refugees in the country, and for the past seven years San Diego has led the state in resettlement cases. Just this past year, San Diego received 2,338 refugees, 685 of which were Syrians. Others came from countries such as Afghanistan, Democratic Republic of Congo, Iran, Iraq, Myanmar, and Somalia. 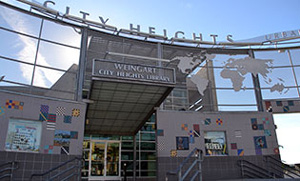 A majority of these new arrivals begin their journey living in one of two San Diego areas, City Heights or El Cajon. City Heights is a neighborhood located in the mid-city area and a home to many immigrant and refugee populations. Walking through City Heights, you can easily find yourself wondering what country you are in as you smell delicious foods from all over the world, hear many different languages being spoken, and see people of different races and ethnicities. Photo: City Heights Weingart Library 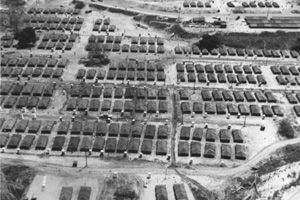 Along your walk you will pass by many Vietnamese restaurants and supermarkets. Many of these store owners and their families first arrived in the U.S. on Camp Pendleton, a U.S. military base located 80km north of San Diego that temporarily housed more than 50,000 Vietnamese refugees after the fall of Saigon in 1975. Camp Pendleton was one of a handful of bases, which housed refugees in tents and metal huts while they awaited immunizations and documentation that would allow them to resettle in local communities across the U.S. San Diego’s warm climate and access to City Height’s affordable housing attracted these new arrivals to this white suburban neighborhood and so began the process of transforming City Heights into the ethnic enclave it is today.
Photo: Camp Pendleton
Since the arrival of the first Vietnamese refugees more than four decades ago, the U.S. Congress has approved the Refugee Act of 1980, which instituted a formal resettlement program. The program contracts with nine resettlement agencies across the country to provide a holistic approach to help refugees become self-sufficient, contributing members of American society as quickly as possible. More than three million refugees have been welcomed into all 50 states since the arrival of the first Vietnamese refugees. Many of whom have made their way to City Heights, where you can now find Ethiopian and Salvadoran restaurants, a mosque filled with many Somalis and Sudanese, Halal markets, and the city’s first Burmese supermarket. The local library draws many students for its books and free Internet services and across the street the Mid-City campus provides free and low cost adult continuing education classes. Many of the newcomers spend their first years here taking free English classes, which are offered during the day and in the evening.
The city of El Cajon, located 20km east of City Heights, has also become a familiar neighborhood for new refugees arriving in San Diego, particularly for Arabic speakers from Iraq. Similarly to the migration of Vietnamese to City Heights, it started about 30 years ago when an Iraqi Chaldean immigrant moved to El Cajon, and since then the Arabic-speaking Iraqi community has continued to grow. Arabic markets and restaurants are becoming more common, and local banks and schools are even starting to hire Arabic speakers to assist the growing community. Just this past year, resettlement agencies have began resettling Syrians in this community as well. 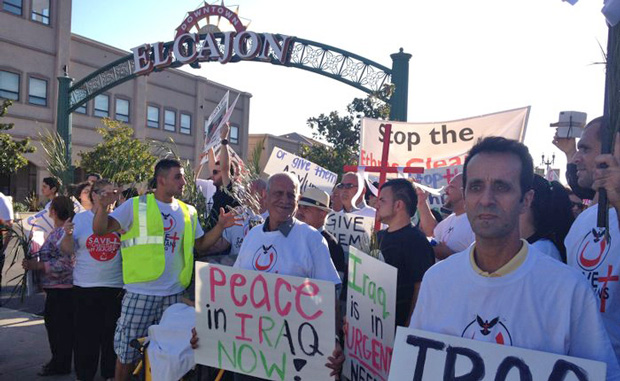 Photo: San Diego Chaldeans and community members march on Main Street in El Cajon at a rally to show support for Iraqi Christians, Aug. 19, 2014.
San Diego has four resettlement agencies working with these new arrivals, and I have had the opportunity to work with two of them, Alliance for African Assistance and the International Rescue Committee, in addition to volunteering with a number of smaller community-based organizations. Through these experiences, I have witnessed firsthand the supportive and constantly growing network that exists to serve refugees when they first arrive in San Diego.
Resettlement caseworkers and other agency staff, often times former refugees themselves, work closely with the new arrivals particularly in their first three months as they begin navigating the U.S. system – applying for IDs and Social Security Cards, going grocery shopping, using public transportation, and going to the doctor. English teachers, employment counselors, and financial education specialists further prepare the clients for employment and self-sufficiency in the U.S. through classes, trainings, and field trips in the community.