トップページ > 難民支援協会の活動 > 活動レポート > > The Meaning of "Returning Home" for One Family

The Meaning of "Returning Home" for One Family

"I'm sorry about the mess. We need to get rid of all this by next week. Can you believe it?" Tin Nwe Oo laughs as she and her husband Tin Win invite us into their home. The words "CLEANING - FINAL" are marked for next week on their calendar. The couple have decided to bring an end to their 15 year stay in Ota city, Gunma Prefecture, to return to their homeland in Myanmar. Their three children will remain in Japan; a conclusion reached after numerous discussions amongst the whole family.

Tin Win came to Japan in 1996. He grew up in Myanmar, the son of a wealthy apparel merchant family, and after graduating from university he was involved in the democratization movement while working in the family business. As a Muslim with Pashtun roots, Tin Win is a minority in Myanmar both in terms of race and religion. He was a senior member of the National League for Democracy (NLD), spearheaded by Aung San Suu Kyi. When the military junta began imprisoning many party members, he decided to leave for Japan, heeding strong insistence by his family.

His life at home was comfortable, but in Japan he faced a series of hardships. Though fluent in five languages, Tin Win could not speak Japanese, and his first job was cleaning the floor at a Pachinko parlor. Other jobs following this also involved manual labor, a new experience for him, but he did whatever came to him.

Two and a half years after applying for refugee status, he was accepted on the initial assessment, a rare occurrence. This was because he could show decisive evidence such as photographs of him appearing together with Aung San Suu Kyi. Soon after, he was permitted to bring his wife and three children to Japan as well. Being under surveillance by the government, his family left the country under the premise of attending a relative's wedding in India. They reunited in India, and came to Japan to start life afresh.

A Second Homeland that the Family Worked Hard to Establish 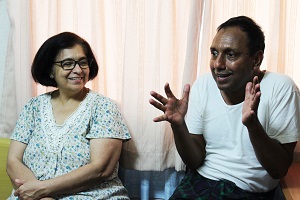 When they arrived in Japan, official support to help refugees learn Japanese or find employment was near non-existent, but learning Japanese was top priority for his wife and children. They managed to get in touch with the related authorities, and enrolled in a six month Japanese language program that was established for the Indochina refugees known as boat-people. Six months is a short time for learning a language, so during those six months the family only spoke Japanese to each other, to make the most of the course.

Soon, Tin Win found a job at a factory and the family relocated to Gunma prefecture. Though rent was lower than Tokyo, they worked hard to give their children a good education. Tin Win's lunch budget was 150 yen a day, and a 250 yen cup noodle was an occasional extravagance.
Sometimes, he skipped lunch on weekends to make money for trips to Tokyo, to take part in the democratization movement while in Japan. Hearing Tin Win reminisce on those hardships, Tin Nwe Oo laughs and says "No more of these stories! You make it sound like I wasn't feeding you properly". The atmosphere is jovial, but we could sense a strong bond forged by the hardships the couple had endured together.

Things were not easy for Tin Nwe Oo either. She raised the three children while she works at the factory. When they came to Japan, the children were aged 14, 10 and 8.
While they were academically successful in Myanmar, the children had a hard time following the classes in Japanese. On occasion the eldest son came home crying that he didn't want to go to school anymore. Tin Nwe Oo gave encouragement to her children during their times of hardship, and also actively sought to develop local ties by joining the school's Parent-Teacher Association and similar groups.

The couple strived to have the children pick up the best of their home country and the best of Japan. No matter how busy they were, the whole family always had meals together on weekdays, and maintained their home tongue and culture, while also making sure that the children had time with their Japanese friends as well. The children grew up learning from their parents, and all three went to university on scholarships and are currently working in Japan.

A "Happy Ending" for All

Fully settled in Japan, Tin Win has now decided to return to Myanmar. And not just a temporary move - he intends to return for good. He wants to devote the rest of his life to the democratization of Myanmar, applying what he has learned from Japanese politics in areas such as conflict negotiation. Recently conflict has been escalating between the Buddhists and the minority Muslims known as the "Rohingya people". He hopes he could act as a facilitator for discussion between the two groups, drawing upon his background as a Muslim.

Tin Nwe Oo, who will return with Tin Win, still has concerns. Will her husband be at risk by returning to activism in their home country? That is her main worry. Also, if you leave a country for 20 years and then return, there is a lot of re-adapting to do. She wonders if they can go through that, now that they are fully accustomed to Japanese food, culture and life.

The children are also not entirely happy with their parent's move. "They would like to support my return to Myanmar as an activist. But they don't want to see me leave. I don't think they have fully accepted this", says Tin Win. On the other hand, the couple stress how fortunate they are. They have a home and a job to return to, because their relatives have kept the business in Myanmar. Many refugees have no chance of finding jobs in Myanmar, and must give up the possibility of returning.* Even if they strongly desire to return to their homelands, refugees face many obstacles in reality, and only a few can actually return. Of course, there are also refugees who actively choose to remain in Japan, having adapted to life here. 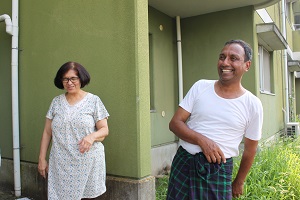 It is often postulated that the key to tackling the refugee issue is to bring peace to the home country, so that refugees can return home. Such work is of course important, but is that alone enough? As the host country in which refugees may live for 10 years, 20 years or even throughout their lifetime, maybe there is more that we need to be doing. Tin Win thinks that the key for Japan to continue its development is to stop fearing diversity. Many refugees are unable to realize their full potential in contributing to Japanese society, being excluded as outsiders. "This country will become better if it learns about different values while retaining at its core the best of Japanese culture. Japan has great education and social infrastructure, but if it continues to do nothing by fearing diversity, it will lose international competitiveness. Of course, it is essential that refugees also learn to respect the rules of Japanese society. Social integration cannot happen from one-side alone. I hope Japan, my second home country, becomes stronger through diversity and continues to drive Asia forwards".

A happy ending for refugees may take many forms. Returning to a peaceful home country, prospering in the host-country, being the bridge between the two countries - each person has their own hopes and dreams, which can differ even within the same family. The decision of the Tin Win family highlights the complex realities of the refugee situation.

*Whilst it may be said that democratization is progressing, there are people who continue to be under close scrutiny by the government and some that cannot gain permission to re-enter the country. In particular those from minority ethnic groups face the difficulty of ongoing conflict, with many unable to return to their communities.

First posted in Japanese on November 1, 2015