This winter, please help refugees survive the harsh environment
"I haven't eaten anything since yesterday," "I have no place to stay tonight," "I don't know anyone I can rely on in Japan. But I can't return to my home country either."

These are just some of the comments from refugees who visit the office of the Japan Association for Refugees (JAR). After fleeing terror in their home countries, and enduring unimaginable levels of stress, many break down in tears. The first thing we do at JAR is to determine -- through individual counseling -- each individual's needs to survive the harsh winter. That includes temporary shelter, light meals, and emergency funds to cover the most basic needs for survival. As our funding resources are limited, we try to not only provide goods and money, but to bring out each person's best to help them survive the harsh reality that awaits them. This series of articles depicts the structural problems refugees face soon after arriving in Japan, and the various support services offered to them through supporters of JAR.

In fiscal 2014, 580 people visited JAR's office in Yotsuya, central Tokyo. This number includes newly arrived refugees, as well as those who have been waiting for years to be granted refugee status. Their situations vary, but winter is always the most tension-filled season of the year.

Japan offers extremely limited public aid for refugees who flee to this country. Any season is a struggle for refugees fleeing conflict or persecution back home, but winter is especially hard because of the frigid temperatures. The reason why survival in Japan is so difficult for refugees is because of the holes in the country's safety net of provision for basic living support. The Ministry of Foreign Affairs provides financial aid for refugee applicants who meet certain conditions but it takes roughly two to three months until this financial aid is approved. 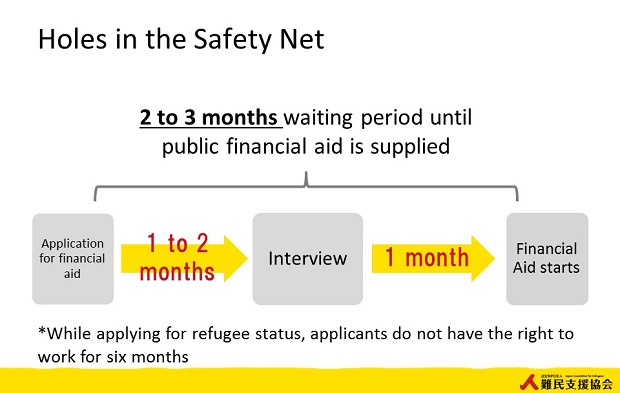 During this waiting period, refugees cannot get any financial aid. Therefore, they need to get by somehow on whatever they brought with them or by borrowing money from people around them. But in many cases, prices in Japan are so much more expensive than their home countries, so they often run out of money after paying for a few days of temporary accommodation. In addition, many come to Japan out of coincidence, such as the fact that Japan was the first embassy to provide a visa for them. Therefore, refugees often have no acquaintances or anyone to rely on for help. By the time they somehow find out about JAR through Internet searches and other methods, some often have less than 100 yen left and have not eaten in several days. To live for more than two months under such circumstances without any public assistance is extremely challenging. In order to somehow stay alive, JAR helps by offering light meals, emergency funding, and temporary shelter. But there is a limit to what we can do. The temporary shelters have been constantly fully occupied, and many people are spending nights on the streets while they are on a waiting list. One man who fled from Syria says, "I borrowed money because I couldn't work for the first six months." This man was able to make his own contacts in Japan and approach them for help. But in any case surviving for six months without income is not easy. When they inevitably end up being homeless during the harsh winter, survival becomes even more difficult.

More than half of the clients who visit the JAR office are from the African continent, some of whom have never experienced cold weather before. While they wait for a vacancy to open up in the temporary shelters, we give them blankets and warm clothing. But that's not enough to stay warm in the Tokyo winter. They often walk around the streets all night long to keep warm, because "it's so cold I can't stand still." These people often take naps in our offices during the day. Some people get sick due to the cold and the uncertainty of their future. Therefore, the staff members of JAR ensure that clients get emotional support as well to survive the winter. The donations you make can pay for refugees to get some rest in warm beds, visit the office for counseling, and provide emergency supplies like food. We ask you for your continued support so that refugees who flee to Japan can survive to enjoy the warm spring season in Japan.

What Financial Assistance Does the Ministry of Foreign Affairs Provide?
The Ministry of Foreign Affairs provides financial assistance to people who are struggling financially during their application for refugee status. However, the amount is not sufficient for living in Japan, with only 1,500 yen per day for daily necessities, and a maximum 40,000 yen a month for housing for a single person. That's roughly two-thirds of the amount of public assistance (given to the general public who are seeking financial assistance from the government). Medical costs are paid in full at a later date as necessary. If an applicant receives any other income, that amount will be deducted from the financial assistance. Therefore, even if applicants receive financial assistance, they continue to struggle. Some recipients regularly visit JAR in order to receive donations of food and other necessities. In addition, although it takes an average of three years to receive definitive results about whether they will be granted refugee status, recipients receive financial assistance for only an average of 14 months*.
＊

(This figure is according to the Justice Ministry's response to an inquiry submitted by Upper House Member Michihiro Ishibashi during the 189th session of Diet.)

First posted in Japanese on December 5, 2015