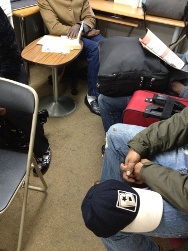 The number of refugee applicants is increasing at a record-setting pace this winter. Roughly three times more refugees have visited our office than previous winter so far, and many of them have no place to stay for the night. JAR has already spent more than allocated budget for refugees' living and lodging expenses.

If there were any vacant shelters, we would refer the refugees to them; however, with the significantly growing number of refugees, it is now more difficult to find any vacancies. The least we can do is to provide them with a sleeping bag and survival information such as locations of soup-run, so that they could survive somehow on their own. We often try to find a cheap lodging house or a hostel around 2,000 yen per night for a woman or a person in poor health, but we cannot offer same support for every refugee.

It is not certain why the number of refugee applicants is increasing. Yet it is obvious that JAR has received many more inquiries than ever before from refugees from African nations this winter.

Because of the situation mentioned, your kind donation is critical for us at the moment.

Not only refugees but also the staff members are encouraged by these kind words.
We look forward to receiving your continuous support.

(Photo: Refugees who are waiting to receive support from JAR at the office.)